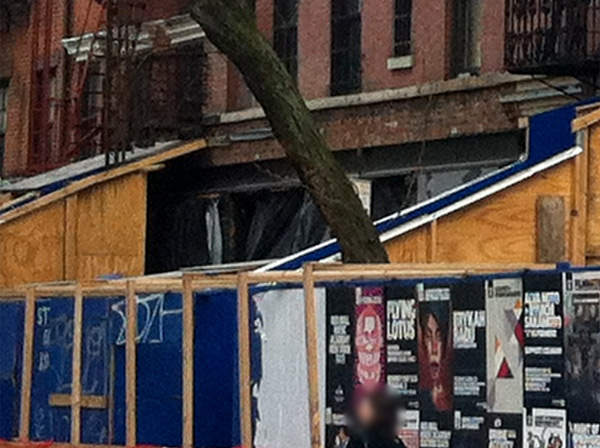 Ask people in the neighborhood what they think of the incoming 7-Eleven at 170 Avenue A and they’ll let you know! “It’s a neighborhood disgrace,” said a neighbor who lives across the street. “The interior of the structure is exposed to the elements, the plywood is curling up in some spots and has completely fallen off on others.”

Recently an apartment above the 7-Eleven construction site was broken into while the female resident was asleep. Residents in the building believe the exposed wood and broken security light made it easy for the four men to raid her apartment. The security light has since been fixed and some of the loose plywood has been removed. Residents of the building are also suing Kushner Companies, the building’s new owner, for failing to provide basic services like heat, hot water and severe damage to their apartments from the construction.

Back on the street, the 7-Eleven store is starting to resemble the infamous Kowloon Walled City more than any convenient store. The new 7-Eleven was scheduled to open in May but the opening date has since been pushed back to June. 7-Eleven is allegedly paying $35,000 for the space and has not found a franchisee for the location.